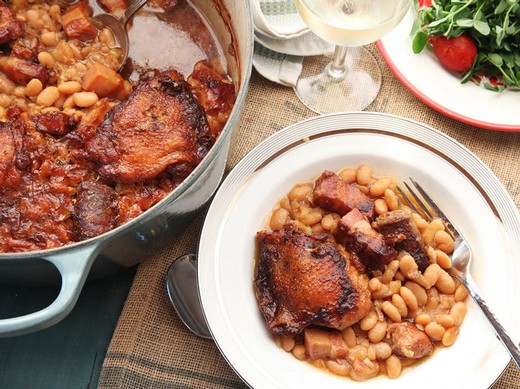 In a large bowl, cover beans with 3 quarts water and add 3 tablespoons salt. Stir to combine and let sit at room temperature overnight. Drain and rinse beans and set aside.

Adjust oven rack to lower middle position and preheat oven to 300°F. Place stock in a large liquid measuring cup and sprinkle gelatin over the top. Set aside. Heat duck fat (if using) in a large Dutch oven over high heat until shimmering. Add salt pork and cook, stirring occasionally, until browned all over, about 8 minutes. Transfer to a large bowl and set aside. (If not using duck fat, cook pork with no additional fat.)

Season chicken pieces with pepper (do not add salt) and place skin side-down in now-empty pan. Cook without moving until well browned, 6 to 8 minutes. Flip chicken pieces and continue cooking until lightly browned on second side, about 3 minutes longer. Transfer to bowl with salt pork.

Add sausages and cook, turning occasionally, until well-browned on both sides. Transfer to bowl with salt pork and chicken. Drain all but 2 tablespoons fat from pot.

Add onions to pot and cook, stirring and scraping up browned bits from the bottom of the pot. Cook until onions are translucent but not browned, about 4 minutes. Add drained beans, carrot, celery, garlic, parsley, bay leaves, cloves, and stock/gelatin mixture. Bring to a simmer over high heat. Reduce to low, cover Dutch oven and cook until beans are almost tender but retain a slight bite, about 45 minutes.

Using tongs, remove carrots, celery, parsley, bay leaves, and cloves and discard. Add meats to pot and stir to incorporate, making sure that the chicken pieces end up on top of the beans with the skin facing upwards. Beans should be almost completely submerged. Transfer to oven and cook, uncovered, until a thin crust forms on top, about 2 hours, adding more water by pouring it carefully down the side of the pot as necessary to keep beans mostly covered.

Keep up to date on the latest wine releases, events, and about all things Margerum.